What is Passport?
A Passport is an official document usually issued by a country’s government, certifying the holder’s identity and citizenship for the purpose of international travel.

The Passport Act, 1974 and Passport & Visa Manual 2006 regulates the issuance of passports. There are three types of passports being issued by the Pakistani government:

Note:
Passport having validity of 05 years cannot be converted into validity for 10 years.

Children under 15 years of age will be issued Passport having 05 years validity.

Diplomatic Pakistani Passport:-
Diplomatic passports are issued by the Ministry of Foreign Affairs to the Diplomats and other entitled categories in pursuance of Para-45 of Passport & Visa Manual, 2006.

Official Pakistani Passport:-
Official passports are issued to Pakistani Nationals who are Senators, MNAs, Provincial Ministers, Judges of the Supreme Court of Pakistan/High Courts, Officers serving with the Government and proceeding abroad on official assignments etc. in pursuance of Para-9 of Passport & Visa Manual, 2006.

Official passport shall be issued to the following categories of persons:

i) Members of the National Assembly and Member of the
Senate; their spouses, parents and dependent, un-married
children upto 28* years of age.

* Documents Required for Passport in Pakistan *

Required Documents For Passport Application:
Following are the require documents for Pakistani Passport.

Here we see How to Apply for Pakistani Passport, and what stages we need to follow at the Regional Passport Office (RPO) for obtaining the Machine Readable Passport (MRP):

We will go through the following steps at the Passport Office.

NOTE: Before arrival at the Passport Office, the Original Bank Challan receipt must be acquired from the authorized branches of the National Bank in Pakistan & relevant bank branches for Foreign Missions respectively, by depositing an appropriate Passport Fee.

In Machine Readable Passport all sorts of endorsements, including names of children in parents’ passports are prohibited therefore, Separate passport will be issued to each and every applicant irrespective of age.

The applicant will produce the original CNIC or Children Registration Certificate (CRC), in case of below 18 years of age, along with its copies and Bank Chalan Form.
The Camera operator will proceed with the capturing of the applicant’s photograph.
The token will be issued to the applicant.

After getting taken now applicant approach the Biometric Counter as soon as his/her token appears at Biometric Capturing Counter.

Now applicant will go to the Data Entry Counters when his token number appears on the Counter.
The Operator will enter all required details of applicant while the data entry screen will also be visible to the Applicant.

In case of any correction in data the Applicant should guide by the Data Entry Operator accordingly. After the data entry the completed Data Entry Form will be printed by the operator and will be presented to the Applicant for verification(Passport Application Form).

The Applicant will verify all its contents by signing the form.

The applicant will be asked to collect duplicate token from the coordination assistant next to the data entry counter.

Finally, the applicant will appear before Assistant Director when his token appears on AD counter along with all the original documents.

The Assistant Director will interview the Applicant and declare his verdict to the applicant whether his case is to be allowed go-ahead or overruled.

Assistant Director will defer the case of Applicant below 18 years of age and will hand over the printed form to the applicant for attestation of his photograph from a Class 1 Govt. officer.

The attester will have to write his/her CNIC No. along with the official stamp on the form.
On production of the completed form by the applicant previously deferred Token will be reactivated.

NOTE: Passports dispatched from the Headquarters for delivery to the applicants within prescribed processing periods could be tracked through SMS & Online Passport Tracking System, but to reach their destination, i.e. respective Regional Passport Office (RPO) or Foreign Mission (FM) they may take some shipment time.

Time Duration For Passport Delivery: or How long does it take to get a passport?

In case of the loss of passport following formalities will be completed:

Third Time Lost:
(i) Pakistan’s Mission Abroad will issue emergency passport for return to Pakistan with an intimation to Dte. Gen. I&P.

(ii)In Pakistan, the case will be referred to Dte. Gen. I&P for further action.

Register For Check Online Passport Status:-
We need a user name and password to login therefore, we will register first in order to avail this Passport Tracking Facility. 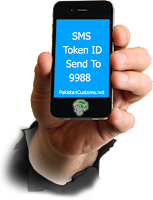 Types of LC in Export/Import Business & Their Usage in Pakistan